We’re captive on the carousel of time…. Joni Mitchell 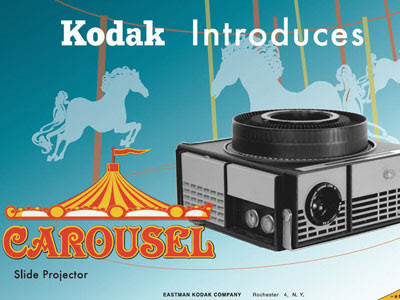 On the Season One finale of Mad Men, Don Draper is seen making a pitch to executives of Eastman Kodak, who are looking for an advertising agency to market their new product – a slide projector which uses a circular tray to advance the pictures. They have tentatively called this device “The Wheel.”

In a tour de force presentation, Don renames the project, “The Carousel” and launches into a brilliant discourse about memory, time and childhood. Don knows that it’s the language that matters. The associations we make with the product are what will sell it to us far more than the usefulness of the product itself. Nostalgia, he tells us conjures the pain from an old wound. It is tinged with longing and far more powerful than the memory itself. A projector called a carousel, will sell us the memories of our own childhoods or our idealizations of home.

Memories of childhood. Captured on the carousel of time.

For me, watching Mad Men is like taking a journey in a very personal time machine. And it’s nostalgic in exactly the way Don describes it. Each episode transports me back to a very poignant and painful time in my life.

Anyone who knows me knows that I had a pretty miserable childhood. And if they don’t know it yet, they soon will because it always comes up when I meet someone new. It’s the place I always return home to – the default position when the back button of my memory is pressed.

Early November 1963, eleven years old, waking up on a cold Sunday morning, to the sounds of my mother’s weeping in her bed. I carefully make my way down the hallway and crack her door open only a quarter of an inch or so. It’s all I need to see it – her tiny figure looking armless, shaking uncontrollably as she sobs in the bed she’s shared with my father for fourteen years, under the mocking smiles of the bride and groom in their wedding picture, suspended on the wall above her head.

When I ask her if Daddy’s gone to get lox and bagels, (knowing full well he hasn’t) I think I am trying to make her say it. Maybe I want to hurt her as much as she’s hurt me by failing to make this marriage work, failing to keep him from cheating on her.

The next two weeks do not exist in my memory, because right next to that Sunday in November when my personal world falls to pieces, comes the other day in November when the rest of the world collapses – Friday, November 22, 1963. And this time, what’s left of any hope or faith I might have had about adults is shattered by the announcement over the P.A. system in my elementary school that President Kennedy has been shot in Dallas.  We children, being grimly shuttled home that afternoon,  learn from the bus driver, who was listening to his transistor radio that the president had died.  He was crying when he told us. The first of many adults we will see cry in the confusion and grief of the ensuing days.

Somehow I have always known that in my life, there was some crazy confluence of time and energy, happening during that November, when my personal tragedy intersected with the tragedy of our nation. This convergence would continue throughout the rest of the Sixties and Seventies, as my mother would become addicted to the valium her doctor prescribed for her nervous breakdown, as she recovers and becomes a single mom, goes back to college, becomes a second wave feminist and reshapes her life as the rest of the country is changing around us.

For years, I was ashamed of my own story. We do not have many pictures from this time, either – few were taken. From that fateful November onward, my family’s life became so different from the lives of the Donna Reeds and Ozzie and Harriets surrounding us that I came to view our story as small, shameful, and not worth telling.

But then, last week, while watching Mad Men, this show that has captured the current attention of so many of us in some part because it so readily speaks to the vacuity of the American Dream in this time of economic uncertainty – there on that show – I saw the images of my own life relived on the screen. As Betty and Don Draper’s marriage disintegrates, their children lie on the floor and watch the news unfold on television of Kennedy’s death, Oswald’s murder, and the nation’s mourning. Just as my siblings and I did nearly fifty years ago.

Watching Mad Men in 2010, I can see my own life, replay before my eyes; I’m still captive on the carousel of time. But this time, seeing it refracted on the television screen, enacted by these beautiful actors, written by these talented writers for a show that’s somehow managed to capture the zeitgeist of a time gone by and the present, I am no longer ashamed of my story.

My friend Barry Dansky ( who was the one who encouraged me to watch this series) said it best when he wrote, “Who can watch this [scene]without mentally putting your own slides in that carousel and feeling that terrible ache for a time long gone?” He and millions of others answer this question with two simple words: “Not me.” 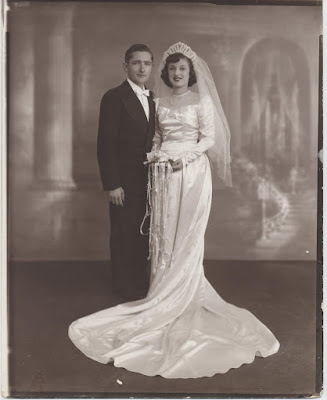 My mother and father, together in happier times… 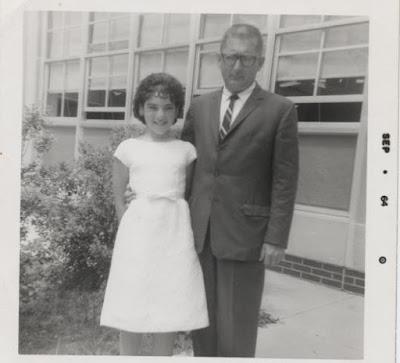 Separate- My father and me at my 6th grade graduation… 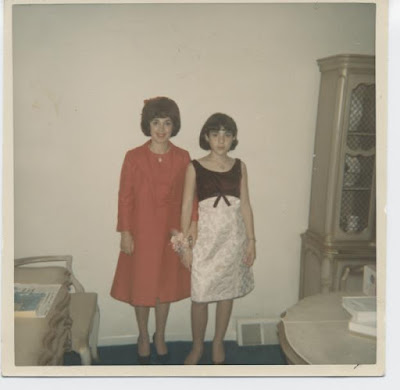 Separate – My mother and me at my Bat Mitzvah….