I wrote this piece several months ago and chose at that time not to publish it to my blog. When I shared it with a few women friends and colleagues, they said that they connected with it, some of them deeply; however, when I gave it to a few of the men in my life, they didn’t particularly like the piece. One even called it a “whiney.” After that comment, I put it away for a while. But lately, as I think about this new blog and what risks a woman must take to speak to the world “on her own terms” it feels right to revisit it, publish it here and see what others might have to say. 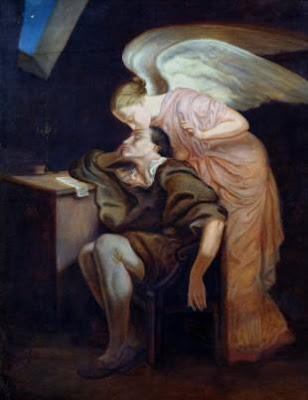 I’ve spent most of my adult life helping other people express – no — transform themselves through writing. As a high school English teacher for thirty-four years, I put my own dreams of becoming a writer on hold and taught thousands of young people, many who received a great deal of affirmation and public acclaim for their writing, winning local and national playwriting competitions and having their work produced in Philadelphia and New York.

I too received recognition as their teacher. And while that was very satisfying to me, I would sometimes feel a twinge of discomfort and even a bit of jealousy that my students were the ones who were being encouraged and supported in their writing, while I remained silent.

Once when I was given an award for excellence in arts education, a news story, written by Dale Mezzacappa appeared in the Philadelphia Inquirer about the impact my teaching had had on my former students. A picture was taken with me and a young man whose play had won the National Young Playwrights contest and been produced off-Broadway.

I still get weak in the knees remembering the moment that I first saw that picture on all of those newspapers in my local Seven-Eleven. There on the front page of the Metropolitan section was a very handsome African American young man, eyes lit up, mouth open, hands gesturing, punctuating his words. Alive, present, he was speaking, gazing out at a rapt audience. And there in the background, silent, looking gently and lovingly at him, with a closed mouth smile like the Mona Lisa was I.

The woman behind the man. The woman I had promised myself over thirty years before that I wouldn’t become when I stopped dating writers in college -when I gave up that ridiculous dream of being Hadley to some guy’s Ernest, or Zelda to some other guy’s Scott. We all know what happened to Zelda, driven insane by the stifling of her own voice. And what might Hadley have written if she hadn’t been typing her husband’s manuscripts?

Somehow in the intervening decades between my decision as a young woman to NOT be silent nor to sublimate my voice to any man’s, I had, as a grown woman and a teacher, done that very thing.

I still have that picture. My husband had it blown up with several others and hung on the wall at my retirement party. I had never shared with him what that photograph really meant to me. He only saw it as one of the triumphant moments of my career.

And it was. It still is.

Only, there was something so primal, almost mythic about that image that went far beyond this student and me and the relationship we forged while he was writing his play.

For weeks after the story appeared in the Inquirer, I would receive letters and phone calls. All from men. Men I didn’t know, who had read the article and seen the picture. Men, who each in their own way, would ask me to help them with their writing – encourage them to finish their novel, revise their poetry, write their play. I would hear the raw emotion in their voices when they told me their stories and the disappointment when I would gently say no to them all, explaining that I had so many students who needed me. That I just didn’t have the time.

What a powerful image that must have been for them too. The silent enigmatic woman smiling with love and grace upon an animated man. When I wasn’t laughing in amusement at these intimate requests from strange men, I seethed.

We are made into muses by men. We carry their work in our wombs. We midwife their stories.

Once, in a playwriting workshop, we were asked to draw a picture of ourselves with our eyes closed. I must have lost my place and started over, because when I opened my eyes and looked on my paper, I saw a woman with another identical woman inside of her womb.

Past mid life.
Time to give birth to myself.
Time for my mouth to open and my voice to be heard.

While researching images to go with this post, I found this book: The Lives of Muses: Nine Women and the Artists They Inspired by Francine Prose. Not surprisingly, all of the artists are men. I’ve ordered this book and plan to read it. I am sure it will help me understand the ways in which women have served as muses for male artists for centuries. But I also will continue to look for other stories, counter narratives – ones where men become the muses for women artists, where women inspire each other, where a woman inspires herself. 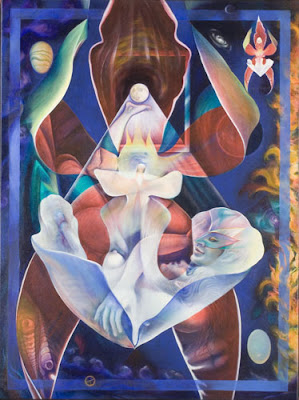 used with permission from the artist.
Visit Maureen O’Neill’s website