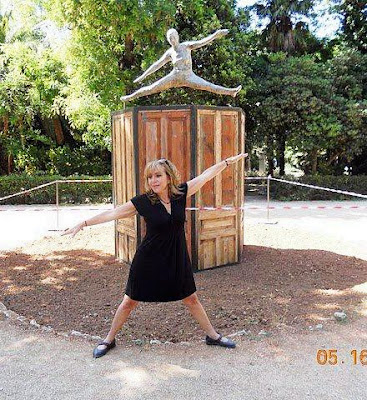 Walking through the National Gardens adjacent to Syntagma Square in Athens, I came upon a mysterious sculpture. If I hadn’t taken a picture of it, I may have been inclined to believe I’d imagned it, as I could find no mention of it in any of the tour books or web sites about this beautiful park.

Seemingly floating in the air, arms and legs outstretched to the sides, a bronze cast of the body of a woman straddled above a wooden structure made up of eight identical doors, hinged and connected to each other in the shape of an octagon.

Right before stumbling upon this, I had been obsessed with taking photographs of doorways — houses, churches, restaurants, abandonned buildings, portals of ruins.
In all of those photographs, there was only one door, one threshold.

This had EIGHT doors, and the woman stretched across them seemed to be embracing them all.

In a workshop this week-end, I found myself retelling my childhood stories to a small group of people. I had told these stories more times than I could ever possibly count but for some reason this time, they were starting to bore me. I was feeling pretty tired of the anger, the cruelty, the despair. And while I wasn’t quite in the mood for forgiveness, I was readier than I had ever been to lay it all down once and for all.

Later, we were asked to write a letter to our parents and read it aloud to our small group. Drained of anger, and anxious to be done with it, I addressed my letter to “Shirley and Bill,” not “Mom and Dad.” ( I never called either of them those names. My mother went from “Mommy” straight to “Mother” and he, though long dead, I only ever called “Daddy” – our relationship ended before I could outgrow that name.

I wrote my letter about stories. Tired of the one I had always told about being the victim of their anger, selfishness and hatred, the carrier of their fury and bitterness, ( “You tell your father he’s a good for nothing cheating, lying bastard!” “You tell your mother that she needs to get her lazy ass out of that bed and go to work!) I wanted to write a different kind of letter in which I would try to understand my mother’s plight and my father’s silence.

After I read it aloud, one of the men in the group looked at me with very kind, open and compassionate eyes and said, “Oh my Marsha! How sad. What does it feel like to spend your life chasing a dead man’s story?”

Of course he hadn’t been dead my whole life. He died at age 71 in 1997, but he had been missing from my life since 1963 when he left his wife and children (with no apparant warning – at least to me) and proceeded to sue my mother for a divorce ( there was no such thing as no-fault back then) so he could marry another woman. 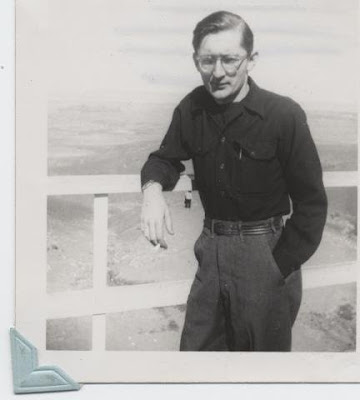 The only version of this story that I have ever heard is my mother’s. And even though she was the victim in this tale, it was a story that she had authored and that she got to tell her chidren. He was the immoral one, the evil man who broke his vows before God, the adulterer who sacrificed his babies on the altar of his selfishness, who left us penniless and did mean and vindictive things to his family, destroyed the mother of his three chidren, who’d done nothing but be the best loving and faithful chicken soup wife she could possibly be.

There is a real danger in a single story. When there is only one story, it becomes the official narrative which cannot be challenged without dire consequences. If you contest it, you become branded as a traitor. If you argue it, you get shot down. There are no spaces in a single story to pry open – no places to look for nuance, contradictions or other possibilities.

My father never told his story. He remained silent except for these words: “I’ll tell you when you’re old enough to hear,” which of course wasn’t when I was 16 or 18 or 21 or 25 or right through my thirties and forties, when silence became the only language between us.

Something happened though this week-end. When I was asked what it has been like to spend my life chasing a dead man’s story, I turned the question sideways. Took the whole damned story of my awful childhood and shifted it slightly, just enough to know for the very first time that my father had given me a gift. 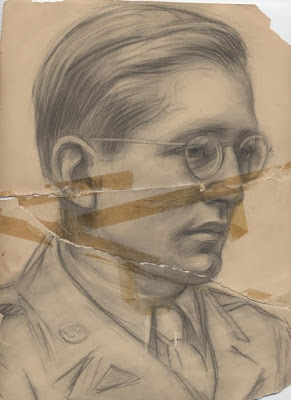 By not telling me his story, by leaving me in the dark and wondering, my father gave me the motivation to make up thousands of stories of my own, devising complex reasons for why he did what he did to his family. Sometimes I’d imagine it was because he was his father’s favorite which made his mother hate him and that made him unstable. Other times, I’d think about his years in the war and would make up stories about how some old war injury caused him to temporarily lose his memory and one day he’d find it again and come home. Other times, I’d make up fantastic versions, like the one where he was possesssed by a she-demon who sucked his soul from him in the dead of night, or that he’d been bewitched by the tweak of a nose and just needed another tweak for the spell to be broken.

As the years progressed, it was my mother’s single story that did the most damage to my soul with the insistance that there was no other way to see my childhood but hers which cast us all as helpless victims.

My father’s silence awakened in me a fierce need to know – an unrelenting drive to figure things out, to solve problems, look for patterns, search out clues, and create meaning. It led me to want to understand people, their complexities, and their motivations. I pushed me to develop skills that I used in my professional life, learning how to support young people in telling their stories, and in knowing what questions to ask to help them pull the fragments of their narratives together in ways that brought meaning to their lives.

The older I get, the better I understand that everything includes its opposite.

Without death, there is no life.

Without endings there are no beginnings.

And here in my life at this moment, I now know that silence contains voice and every wound contains the power to heal itself. 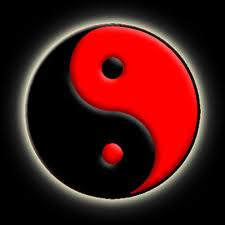