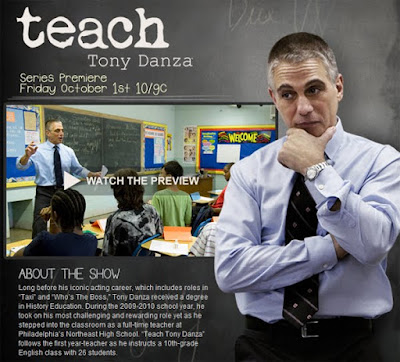 I must admit. The first time I watched it, I cried like a baby, right along with the 59 year old actor who is facing his mortality and wanting to travel down the “road not taken” by becoming a teacher. Being close to this age myself, recently retired from 34 years as a teacher and staring down my own roads not taken, I found myself cheering for him. I cringed as he sweated through his shirt in front of the unrelenting eyes of his 10th grade students and I cried with him as he let his insecurities be seen by a very unflattering camera.

I’m not a big fan of reality shows and I especially dislike ones that claim to be “real” yet are so obviously staged and edited to make a particular point.

While this series does seem to have an agenda (though I haven’t quite figured it out), even in the first episode, I see how it might be a welcome addition to the public conversation about urban public education as its cameras begin to reveal some of the hidden humiliations and personal challenges that urban teachers face. Yes, Danza is nervous, but it is probably close to 100 degrees in that classroom in early September. Even as a comedian, he has a hard time answering the blunt, personal questions posed by his students. (My favorite: “Do you think teaching English is funny?”)

And while the scene at the sign-in counter was clearly staged, there’s not a teacher in the School District who has not been on the other end of that kind of infantilizing dress-down from a power-hungry assistant principal, a dyspeptic head secretary or a vindictive roster chairperson. It’s one of those ironic realities about public education: while schools cannot run without teachers, the people whose very jobs exist to support teachers’ work often treat them with the least amount of respect. No exaggeration.

So this series has the potential to tell an important and very human story about teaching and urban education. But one thing needs to be made clear up front.

Tony Danza is NOT teaching English at Northeast High School.

Face it. Most first year teachers are met with far more difficult circumstances. While we do see Danza struggling, take his struggles, add unwelcoming, unsupportive principals who are terrified about test scores and losing their jobs, throw in angry students who have not been pre-selected, subtract the ubiquitous teaching coach, the books, and supplies (Did Danza go to Beckers to buy those classroom decorations with his own money? Did he have to stop at Kinko’s the night before to make copies of his hand-outs for his one class?) Then multiply it all by 5 – the number of classes that most high school teachers have to teach. Plus a homeroom. And this only scratches the surface of the challenges faced by first year teachers.

If anything, what Danza’s doing approximates student– teaching – the apprenticeship required by traditional teacher certification programs. Even so, the comparison is a stretch, because student-teachers are responsible for planning and teaching three classes (to Danza’s one) while concurrently enrolled in undergraduate or graduate programs, taking courses in the evenings after teaching all day. Not only do student-teachers not get paid, they must pay tuition to their universities for the privilege of completing this mandatory apprenticeship.

For me, the most telling line in the episode is when Danza says that it’s hubris for him to think he can do this. Indeed. This hubris should be shared by all of those non educators who think they know enough to wrest control of our public schools.

Later after being corrected by his student Monte about omniscient narrators in short stories, Danza laments to the camera that there is so much he doesn’t know.

He took his education course work forty years ago and he’s a former History major trying to teach English. My bet is he doesn’t have a clue about WHY he’s teaching the aspects of plot, types of narrators and the other elements of literature in short stories other than the fact that it’s in the curriculum and pacing schedule for the month of September. Nor does he know how to organize that information in ways that will engage the students in their own learning.

If Danza were truly a first year teacher (or even a student-teacher as I suggest he is,) he would have taken (or be in the process of taking) courses in Curriculum Theory, Adolescent Psychology, Educational Philosophy, Technology in Education, Special Edcuation, and discipline-specific Methods courses. He would have written lesson plans and developed his own curricular units and had them reviewed and evaluated by his professors and his peers. Additionally, he would have taken dozens of content courses in American and World Literature, Shakespeare and Chaucer, African American, Latino and Asian American Literature, Grammar, Linguistics and Composition, just to name a few.

No wonder that he feels he doesn’t know enough.

To their credit, the makers of Teach Tony Danza do not seem to be playing “Gotcha!” with the students, teachers, parents and administration of Northeast High School. The teaching coach seems level-headed and knowledgeable, the other teachers smart and caring, the parents involved and concerned, and the students themselves alive and engaging. In the first episode, it’s Linda Carrol the pincipal who comes off the best, showing the right combination of toughness and support.

And Danza seems sincerely eager to learn from them.

The most enlightening segments (something I hope will continue in future episodes) are the small group discussions the students have after class, in which they smartly deconstruct Danza’s teaching. They know. After all, they’ve had ten years of practice reading (and shaping!) their teachers. They are very aware of the ways in which their actions can impact the kinds of choices Danza will make in the future. And we get to listen to them plot.

This is what the other teachers keep trying to tell Danza. His greatest resources for learning how to teach are sitting right in front of him. By the end of the fist episode, he seems to understand.

So for now, at least, I am going to accept this series’ good intentions and view it as a true inquiry into what it takes for this one man to become a teacher.

As a retired teacher, I hope that this series will complicate and deepen the public conversation about fixing the public schools that Waiting for Superman has engendered. As a teacher educator, I want this series to shed some light on why good teacher preparation programs and supported apprenticeships are imperative.

But as a person of a certain age, I want to see Tony Danza stare down his demons, accept with humility what he doesn’t know, seek the knowledge he’s lacking, then build on his life experiences to learn how to teach.

Danza, says it himself about his students: “At the end of the day, there has to be some learning.”