skip to Main Content
Recently, my therapist, the Jungian analyst Angelo Spoto, told me a story he had heard about James Hillman. At age sixty-five, Hillman had set off to visit his  85 year old father.  At this time in Hillman’s life, he was very successful, having studied with Carl Jung in Zurich, penned dozens of highly acclaimed books and founded a school of psychology.  In the story, Hillman recounts how when he begins the journey to his father’s house, he is 65 years old. As he gets closer, he becomes 55, then 45. As the miles accumulate, he regresses further to 35 and 25. When he pulls into the driveway, he is 15 and by the time his aged father answers the door, he is five years old.
I know what this feels like – how one can be fifty-nine and nine at the same time in the presence of your family – especially a family filled with people who have never really understood you at all.
* * * * * * * * * *

I spent the entire last week of January inside – inside my house and inside myself, creating four mixed media collages for a collaborative exhibit by local artists at the Muse Gallery in Olde City, Philadelphia. 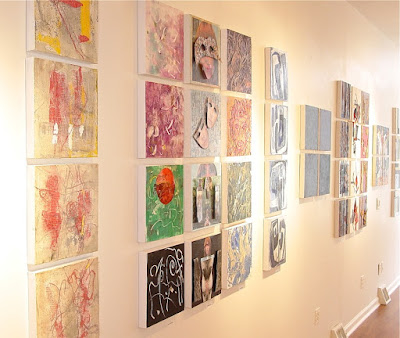 I am not an artist. At least I wasn’t trained as one. And I know that some artists try their entire lives to have their work exhibited in a public gallery. So I know how lucky I am. This opportunity found me. Knocked on my door like the travelling Kabbalah salesman from over a decade ago, who when I told him I had recently become curious about Jewish mysticism said with a gleam in his eye and a lilt in his voice, “When you’re ready to learn a teacher will appear.”
I bought the entire Zohar for over five hundred dollars.
There are no coincidences. 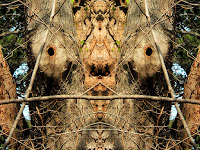 I signed up for a four week collage course last summer at the Main Line Art Center at a time when my sense of outward identity was falling apart, causing acute disruptions on the inside. Without a plan, I brought in images of myself to use for my collages – pictures of my face from all different stages of my life.  I also brought in my photography – pictures I’d taken of trees and shadows, altered to reveal hidden images and surprising connections.  In class, I cut and pasted my photographs onto each other in varied ways – an eye here, an upside down mouth there, my shadow hanging from branches of anthropomorphic trees, two right halves of my face, glued together. 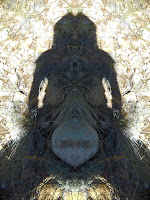 I got lost in the process. There were times when I felt myself begin to giggle in sheer delight. My teacher, Francine Shore encouraged me on this introspective and mythopoeic journey. She never made me feel as if I were strange, even though the other women in the class were making pretty things with butterflies and flowers.

That was last summer. In December, Francine emailed me and asked me if I could make four collages for a show she was curating at the Muse. Each artist was to create four images a piece, on the same 12 x 12 x 1 ½ inch canvases, leaving the edges white.  These similarities would unify the exhibit and Francine would then arrange these diverse images in an artistic way that would in itself be a collaborative work of art.
Of course, I said yes, but as the weeks wore on towards the February 1st deadline, and the canvases remained blank, I began to lose my nerve. About to back out, I went to visit Francine with some of the collages I had made in the past, hoping for direction. She looked through the different things I had brought – mosaics of pretty ladies, mixed media homages to Frida Kahlo, and the surreal images of my personal journey.
“I know you’re not an experienced artist, Marsha,” Francine began. “But you tell a provocative story with these images,” she continued, pointing to my idiosyncratic self portraits.  “These other ones are nice, but they are decorative. They aren’t art. Art invites the viewers to come closer, to get into the image, to wonder what is going on and to bring their own meaning to it.”
I listened intently, trying to see my images through others’ eyes.
“Go home and do you,” she concluded.
Of course I waited until the last possible minute, but I DID create four new pieces that were deeply personal.
I went home and I did myself. 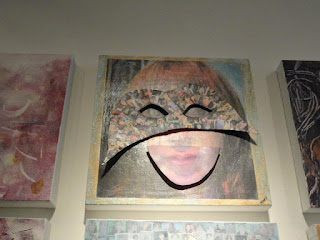 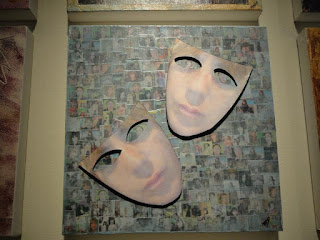 I cut out tiny images of my life – family scenes and picture of scared rituals, like bat mitzvahs and weddings and important moments like births and family functions from my childhood and pasted them onto a mask which I placed on top of a photography of my face with nothing but the eyes peering out intently thought the cut outs.  For another, I took those same images I had used for the mask, glued them on the canvas in rows like strips of film then used cut up pictures of my face to create the masks of tragedy and comedy affixed atop the smaller pictures of my life.

It was a deep, deep internal process. The placement of each tiny picture brought up old and painful memories. What drove me to place the picture of me pregnant with my daughter ( who is herself now pregnant) next to one of my father  ( who never saw me pregnant, we were already estranged) or one of my wedding pictures next to the one of me as mother of the bride?
I relived my entire life while making these images — all of the joy, complexities and pain during this one agonizing week. 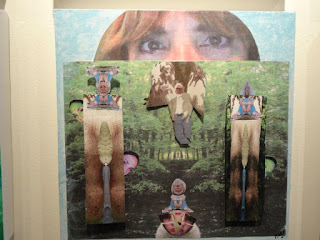 And then I was done.
I completed the final image, a tree in the shape of a woman’s body, with my solemn face growing from the trunk, eyes masked before dark on the last day of January. The entire piece was in black and white except for an upside down image of my face, cut in the shape of a womb and affixed to the body of the trunk of the tree. 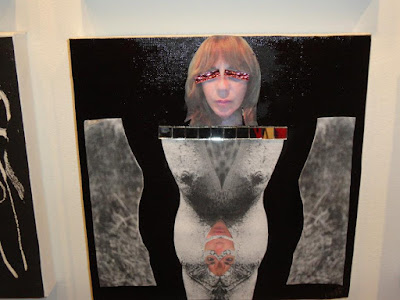 I called this piece “Insight.”

I probably should not have agreed to meet my mother, her husband, my sister and brother for dinner that night. I was too churned up and too vulnerable to see them.  But I said yes because I was struck by the reality that at eighty-two my mother was cherishing every possible opportunity to have all three of her children together and my brother was making a rare appearance in Philadelphia.
So I went.
My sister was the first to start the familiar ritual. Once everyone was seated, before we ordered dinner, she took out the advance copy of her soon to be released book – a very thorough and informative guide for parents about talking with their children about sexuality and protecting them from sexual abuse.  She was able to write this book drawing on her experiences as Director of Prevent Child Abuse New Jersey and her work in government in Child Welfare. She also announced her recent appointment to a special research and teaching position at the University of Pennsylvania.
My brother then whipped out his iPad and proceeded to show videos of himself at work as the Executive Director of Communications for the Baltimore Ravens in features the Wall Street Journal and Baltimore Sun had done about him. He was in town to be the announcer for the Big Five Basketball game between Temple and St. Joes.
Then there was me, with my retired self, my idiosyncratic images and all of the insecurities I have always felt in the company of my highly successful (and younger) siblings.
I shouldn’t have done it.
I knew better than to try to enter this arena. I knew I should never try to compete. But I was nine years old again, vying for my mother’s attention, trying so desperately to be seen, affirmed and understood.
So I took out my puny Blackberry and opened to the small images of my kooky collages and tried to pass it around the table to share with my family. My brother didn’t look, passing my phone off to my sister who said, “I”ve seen these before” ( she hadn’t – I’d just completed them that afternoon). She in turn passed it to my mother who just peered at the screen perplexed and said, “What’s this? I can’t make it out.”
On the verge of tears, I left before dessert and cried the entire ride home.
When I walked into my house, still a wreck from my week of manic creativity, it was filled with paper and glue and scissors and paint strewn everywhere. There were scraps of my face lying on the floor in every room.  I walked slowly into my office cum studio and I looked up on the shelf below the window. There I saw four completed mixed media collages each telling a piece of my story, of my inner journey towards integration and wholeness. 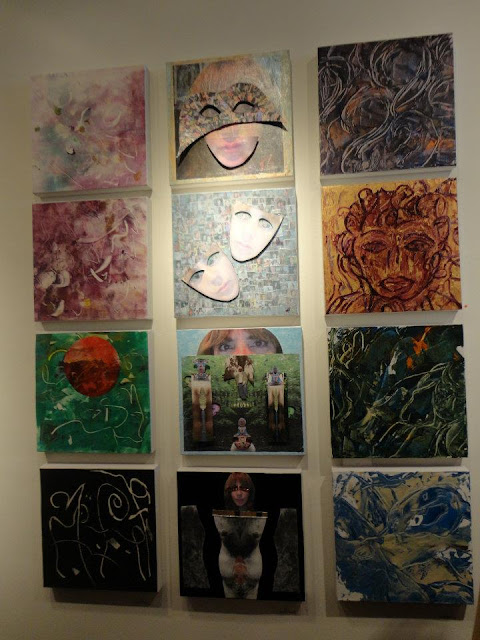 I looked at up them and they looked back at me and we smiled.
I was fifty-nine again. 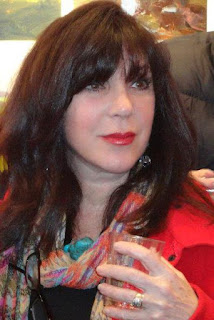 And I was okay.
At least for the moment. 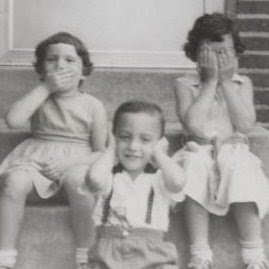