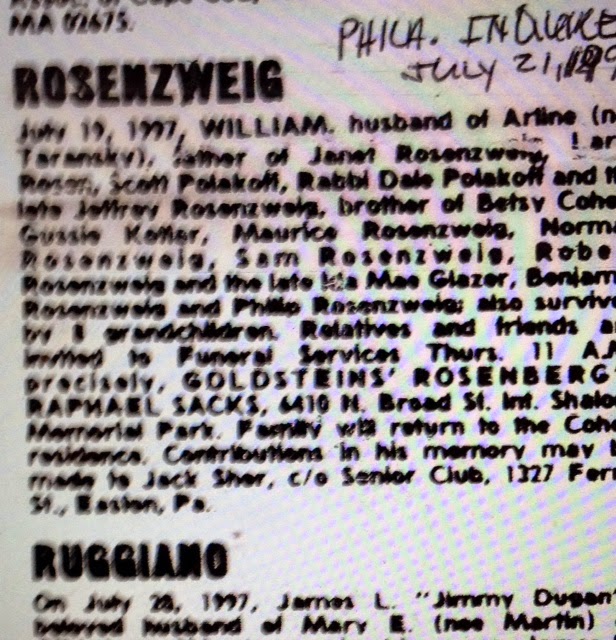 I don’t think about the dead very much. They are not a part of my life these days, the way they once were when, as a child, I would climb into the back seat of my father’s late model American made sedan, fight with my younger sister and brother about who had to sit in the middle over the hump (never me, I was the oldest and for a while at least, the strongest) and make the long trek from Northeast Philadelphia to the outreaches of Delaware County where generations of Jews on my mother’s side were buried.

My father’s family was buried in Easton, PA in a small cemetery that in my memory housed only other people with my last name. I visited this mythical graveyard only once, when my grandfather Harry, the patriarch of the Rosenzweig clan, father of ten including my father Bill, his first born, died from the ravages of prostate cancer, an affliction that would one day claim my father as well. 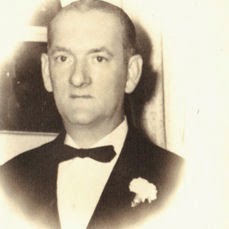 This time the trek was up scenic Route 611, following the Delaware River Canal, right under the bridge where (as the story was always whenever we went to Easton) my father, as a boy, was left to hitchhike to Philadelphia when his family moved because there was no room for him in the car. I never did see my father buried there. His second wife, still nursing some ancient grievance, barred me from his funeral.
When my husband first forwarded me the email about the “ground breaking sale” at West Laurel Hill Cemetery, I thought it was a joke. Later, while we were having lunch, he asked me what I thought about the email he had sent me.
“It was pretty funny,” I said.
“But what do you think? Do you want to be buried there?”
He went on to tell me that this historic 175 year old cemetery, just two minutes from our house in Bala Cynwyd, PA, had recently decided to add a Jewish section and that they were running a special on plots.
“Four thousand dollars per grave,” he said. “That includes perpetual care. No annual fees. The kids won’t have to pay anything.”
“I really don’t want to think about this right now,” I said. “What’s the rush anyway?”
“The sale ends tomorrow. After that, the price goes up to forty-five hundred. That’s a thousand dollars more if we wait.”
I hadn’t ever really given this topic much thought and I wasn’t particularly interested in starting now. Approaching 59, I still feel vibrant, and I am blessed with good health and robust energy.
“Okay,” I said reluctantly, convinced mostly by my husband’s argument that it would save the children aggravation.
That and the fact that secretly, I had always dreaded the prospect of being laid to rest in Mount Sharon, where I imagined Anti-Semetic teenagers hanging out in the Jewish cemetery getting drunk and high on my grave.
And I must admit, once there, I was impressed by the tour of the grounds, and the beauty of the surroundings and the fact that Laurel Hill was close to home.
We picked our sites, on the aisle, and set far back from the road. As we were getting ready to sign the papers, a signing process identical to the one we went through when we bought a time share in Florida or a condo at the Jersey shore, I had a moment of hesitation.
“I don’t know if I can do this,” I said. “What if I change my mind?”
“Don’t worry,” our overly cheerful sales person said, sensing that she could lose this commission. “If that happens, you can always sell it on Craig’s List.“
And with that, I added my signature, right next to my husband’s on the dotted line.
Death may be permanent, but real estate is transferable.