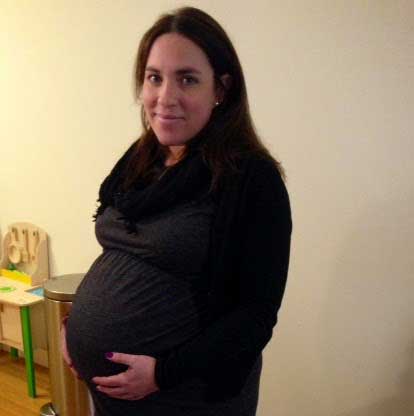 Today is a good day to be born.

I write this in my journal every day for a week as I sit anxiously across from my daughter Ali, who at 40 weeks is more pregnant than she’s ever been.

Her first child, Tyler, was due on May 31, 2012, only he arrived two months early. Ali called me in Philadelphia from her home in Boston late in March to tell me that she thought she’d peed herself.

She called her husband Jason, and they got into a taxi where her water continued to leak from her body and they admitted her immediately when she arrived at Brigham and Women’s Hospital – a major teaching hospital of Harvard Medical School and one of the best hospitals in the world. She assured me that she and her baby were in the best of hands.

For eight days, she lay in a hospital bed, trying not to move and letting the baby inside of her grow for as long as possible.  It was important that she remain infection-free.

Her in-laws brought matzo ball soup and roasted chicken to her hospital room on the first night of Passover.   We were having a traditional seder in Philadelphia and Ali participated via cell phone.  We all laughed nervously when Ali recited the first of the Four Questions: “Why is this night different from all other nights?”

The infection came less than two days later, shocking us all.  We had allowed ourselves to feel confident that Ali remain pregnant for the two weeks the doctors were hoping for when they would do a Cesarean section and deliver the baby at 34 weeks. They’d already given her a shot of steroids to hasten the development of the baby’s lungs.

“She’s having the baby now!” They are doing an emergency Cesarean!”

When the nurses had come in to take her temperature that evening, they discovered that she’d developed a fever. The baby would have to come now.

We packed our bags in silence and got into the car and began the now familiar  journey up the Jersey Turnpike, the Garden State Parkway, across the Tappen Zee Bridge and through the endless state of Connecticut.  Neither of us said a word, each saying our own silent prayers, afraid to alarm or upset the other.
Just as we were crossing the Hudson River suspended on the Tappen Zee bridge, the cell phone rang.  It was connected to Blue Tooth and I trembled as I pressed the bottom to connect.
“Hello?”  I heard my daughter’s voice say.  “He’s here.  Tyler was born just an hour ago.  He weighed 4 7 and he’s breathing on his own.
What a world, I thought.  Cell phones in delivery rooms and speakers in cars flying across bridges in the night.
We stopped in a roadside motel in Connecticut to get some sleep and finish the journey the next day.  We wouldn’t be able to see then until then.
I don’t know when I realized that Tyler was born in Easter Sunday.  We are Jewish after all, but then again, so were Mary and Jesus.
It might have been when we got to the NICU at Brigham and Women’s and saw Tyler for the very first time, looking very much like the fetus he really still was.
The hospital photographer has been there earlier soon after his birth and had taken his picture.  And, like all of the other babies born on Easter Sunday,  they’d dressed him in bunny ears.
When we walked into the NICU, and spotted the picture taped proudly on Tyler’s glass isolette,  the nurse looked at us, then back at the picture, then back at us again and turned a deep shade of red.  Maybe she saw something on the chart about the family’s religion or maybe we just looked very Jewish to her.  Whatever the reason, she began to apologize profusely.
But I couldn’t stop laughing!  This precious new life – this teeny tiny baby with a scrunched up face and a feeding tube in his nostrils looked so beautiful and happy in his bunny ears.  It was so sweet and very very spiritual.
This baby, who could have come into the world on ANY day before or after this one, chose (or was chosen by God ) to arrive on Easter Sunday – a day of hope, rebirth, resurrection and faith.
* * * * * * * * * * * * * * * * * * * * * * * * * * * * * * * * **
Two years later,  I found myself in Santa Fe on another Easter Sunday.  I had come there for a six week writing retreat.  Santa Fe is a very Catholic city, and I was feeling very lonely that day,  knowing no other Jews.  The pageantry and the church bells were beautiful but they only underscored my alienation.
So I got into  my car and drove to Ghost Ranch in Abiquiu – a sacred place in the red mountains of New Mexico where Georgia O’Keefe had returned again and again for inspiration from the magnificent landscape.
I had been there several times before, lucky enough to have been chosen to be part of the AROHO writing retreat for women.  And each time I’d been there, I’d had been gifted with visions in the mountains and I’d been inspired to write poetry and new stories.
Alone, I trekked up to the mesa and turned my eyes towards the huge red formations jutting out from the earth reaching toward the heavens.  I closed my eyes and I prayed for the mountain to ground me.

And when I opened my eyes, there she was.

The shadows had mingled with the rocks’ crevices and the sun had allowed Her image to form with a clock draped over her head and her arms pressed in prayer at her chest.

I am attending a writing retreat in Costa Rica at a resort on Lake Arenal.  It is lush and green and beautiful. You can see the volcano tickled by clouds in the distance. I am sitting outside my cabin when I hear a noise coming from the distance.  I look up and I see one hundred children, around eight years of age, wearing bathing suits and carrying bath towels moving towards the water.

With that, these beautiful children drop their towels, run towards the lake and joyously jump in.

I wake alone, in isolation still, but with a feeling of peace.

My fever has broken.

Today is a good day to be reborn.