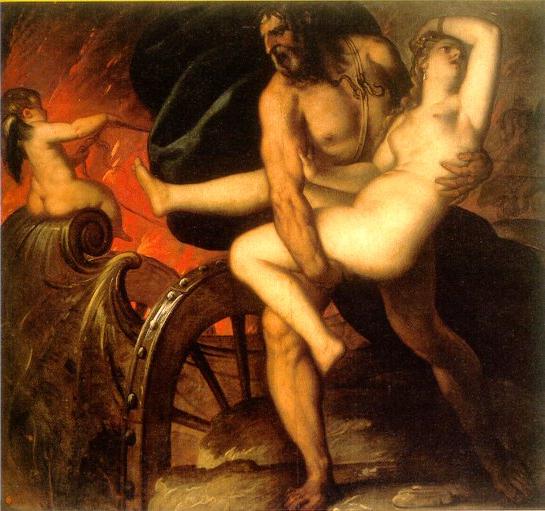 Did she go willingly or was she taken? The story goes, at least the one version we’ve all heard, the one we tell and retell, that she was kidnapped… that the maiden Persephone was out in a field picking flowers, narcissus blooms as it is told, when the earth opened up and she fell into a pit, led into the Underworld by Hades, the King of the Dead and forced to stay there against her will.

Did I say she was raped?  That’s part of the story too and that her mother, Demeter,  so sad and distraught by her daughter’s disappearance, takes to her bed after searching the four corners of the earth and stops doing her work as Goddess of the Harvest plunging the earth into famine. So desperate is the plight of the hungry mortals that they call upon Zeus to intercede, who sends Hermes into Hades to bring Persephone back to her mother.

Ah – but then there is the little issue of the pomegranate seeds.  Does Hades trick her?  Does she swallow them voluntarily?   Whatever the case, because of the seeds, she’s bound to Hades always and cannot leave for good.   She must return each year after her stay with her mother. 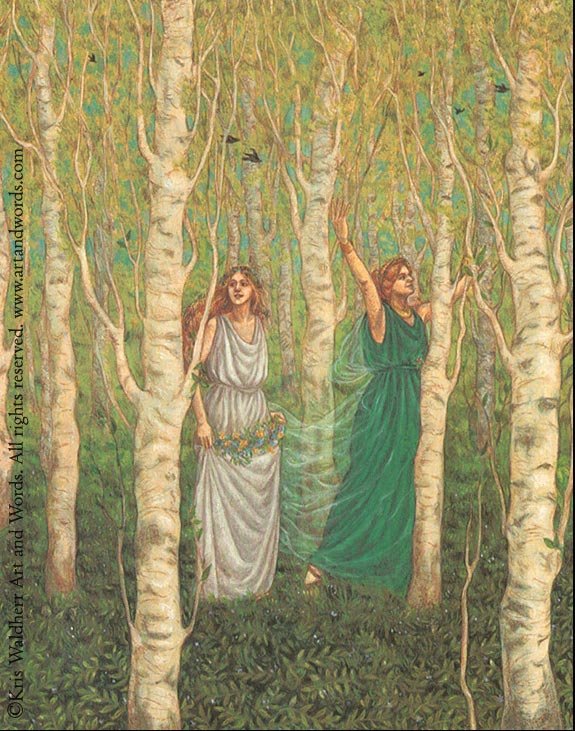 So the story goes that she is reunited with her mother who is happy again and does her job making the crops grow and flowers bloom and it is spring when her daughter is with her but when Persephone returns to Hades as she must, Demeter is sad again and winter falls upon the earth.

And that is why we have the seasons – which is how the story of Demeter and Persephone was taught to me in elementary school and how I taught it too, for thirty five years.
But this story means so much more than that.  To reduce this powerful myth to a simple explanation of the seasons is to miss the deeper meanings, mysteries and archetypes embedded here.  There are those who believe that the myth of Demeter and Persephone is as pertinent to female psychological development as the myth of Oedipus is to the male.
And then there are the Elusinean Mysteries — scared religious rituals based on this powerful story of mother and daughter,  famine and fertility, life and death  — that were enacted in ancient Greece for 2,000 years and were deemed so holy that they remained secret – making it impossible for us today to ever understand the true nature of what this myth meant to those who experienced it as a living practice.

On Saturday May 30, I held a writing retreat for post menopausal, post career, and post child-rearing women at my home. There were 13 of us in all.   I called the retreat “Persephone’s Return” and together, through looking at the myth of Demeter and Persephone, we asked ourselves  – What can it look like to be sixty years old and go down deep into the Underworld to recover the girl we once were  — that girl, who at adolescence, had fallen into the cracks of our unconscious minds in order for our adult personas to emerge.

Persephone left as a maiden but she returned to her mother not as the innocent girl who’d left her but as Queen of the Dead – the psychopomp, who because of those pomegranate seeds,  could travel between the land of the living and the dead and have knowledge of the underworld known only to Hades and the dead themselves.

What happened to those lost girls who went underground and dwelt  in the shadows of our lives all these years, who may have been raped, though one wonders whose story that is –  her mother’s perhaps?  Maybe Persephone was curious, or rebellious, seeing Hades as the ultimate bad boy,  an easy way to rebel against her possessive and over-protective mother.  Or maybe she was Lolita. You remember her. Young. Buzzing with life.  Feeling the power of her sexuality.

What do our own Persephones know?

When I was twelve, I had a dream.  I was baby sitting for a young neighbor.  We were walking hand in hand. Then the rain began.  It was a hard rain, and soon water was flowing in the streets.  The little girl began to shrink.  To my horror, she got smaller and smaller until she slipped from my twelve year old hand and floated down the sewer.
A Persephone dream if there ever was one.

Our heroine has entered Hell.
In the story, her father’s been unfaithful and abandoned the family.  Her mother’s taken to her bed – perhaps already knowing that she’s lost her daughter.  And when her daughter fails to return home one summer night,  the mother calls her father  and he comes to the house, lies in wait for her and beats his daughter upon her return for Hell.   He’s not exactly Zeus and she’s not exactly Demeter, though the girl is Persephone, traveling back and forth between the land of the living and the dead,  until in desperation to escape and to save her boyfriend, she offers herself to him.   In his depravity, he turns that offering into a rape.
The pieces don’t line up exactly.

But that’s not what myths are all about anyway. They aren’t prescriptions or even explanations of things like why we have the seasons.   They are far more mysterious than that – more elusive and more evocative, more fluid and multi-dimensional, like the stories of our lives.

I began the retreat with a prayer of sorts—a moment set aside to express our gratitude for being  healthy and alive to experience this time of our lives.  Then we paused to remember those who didn’t make it to this point.  We called out the names of the women we’d known and loved who had died too soon and their names remained present with us, their spirits hovering in the room as we grateful post-post-post women recaptured, through writing,  our younger selves and welcomed them home.
We embraced their wounds and listened to their dark, harrowing stories – the ones we could never tell our mothers and the ones our mothers could never bear to hear.